Some years ago I rebelled against one of the most systematic of distortions in pre-modern historical re-enactment / living history — the VAST excess of furniture in evidence. The tacit means of my rebellion was to construct a pack saddle shown being used as a camp seat in an exquisitely detailed eleventh-century manuscript from Constantinople. For most of a decade the only use it had was as a seat. When I did get to try it on an animal, I was enormously gratified, for even though it had only been built on the basis of guesstimation inspired by my previous saddlery construction, it fitted the donkey at my local display farm perfectly. Taking it to a market inspired an enormous interest, leading to a commission for Mary Arden's working farm, and a great deal more research in that area. Now, it seems, I am the world expert on the subject, if only because nobody has taken much of an interest before! The examples below are tidily finished articles, but there is plenty of evidence that they could be much more rustic. 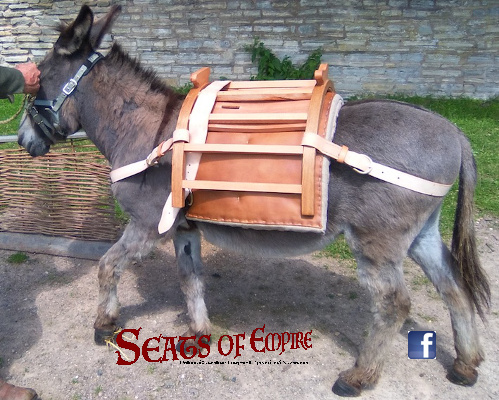 Ben of Mary Arden's farm with his new saddle.